Review of Cyberstorm by Matthew Mather 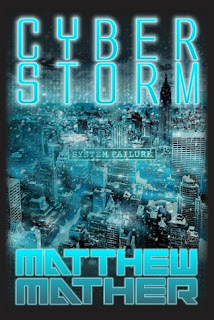 Cyberstorm by Matthew Mather is a snowmaggedon/society breakdown kind of novel. The author does a good job setting up the story and then peppering it with some realistic survivalist tactics and probable prepper type scenarios. However, the story started to drag about a third of the way in and I started skimming once I realized we were going to live each day in real time with the survivors of an apartment building in NYC.

The writing is pretty solid, though, and Mather purposefully focuses on the characters and their interactions; but the genre itself primes the reader for more action I think. I kept expecting the story to widen out and pull back the curtain on the cyber attack itself and its impact on the rest of the world. As another reviewer wrote: "This ended up being more of a survival story amid a disaster in the concrete jungle, than a book about cyber espionage." And I agree, though for what it was I was generally captivated by the narrative's inevitable slide toward chaos, which seemed quite realistic.

Not a bad read, really. Three or three and a half star rating from me because there wasn't much of a climax. The survivalists' desperation ends in a bit of an anti-climax, in fact, and the last 5 to 10 percent of the book is exposition on how a cascade of unfortunate events and paranoid misunderstandings led to a truly terrible breakdown of Manhattan and the rest of the Eastern seaboard. But maybe that's how future disaster situations will spindle out in real life. We may not face an actual dramatic world-ending apocalypse, just an increasing number of dangerous and tragic catastrophes that change our lives in ways we can now only imagine.
<><>
PS Subscribe to my sf/f newsletter and receive an e-book as a thank you gift.