Review of The Man in the High Castle 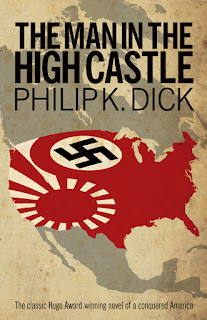 Heads up for those who've not read The Man in the High Castle by Philip K. Dick or seen the series on Amazon Prime - I'm bound to reveal a few spoilers in talking about this story, but I think you can still enjoy the book even though you know where it's going. Just an FYI.

First off, if you're looking for plot and action and interesting character interactions, the TV show is quite a bit better than Philip Dick's original. Dick offers a literary, strongly thematic exploration of an alternative socio-political reality. It's not so much science fiction as a commentary on the then current state of affairs in the US (it was written and set in 1962), and is an obvious speculative musing on 'what might have been.'

The premise, if you are totally unfamiliar with the novel or show, is that Japan and Germany won WW2 and now occupy the west and east coasts of the former United States, respectively. The trope seems quite exhausted today, but I don't think many writers by the 1950s had explored alternative history in quite the same manner; though there were some published, including Bring the Jubilee by Ward Moore (1953) which has the Confederacy winning the Civil War. (Dick says this book was an inspiration for his novel.) The Man in the High Castle, however, doesn't spend a lot of time exploring the inner workings of Japan's and Germany's new regimes; it focuses instead on the interior life of three or four characters as they seek to come to grips with love, loss, work, and future dreams in the occupied states.

And this will either make or break the book for you. If you enjoy literary musings (often abstract and philosophical), interior dialog as a narrative device, and getting to know characters through their psychological ramblings, then you'll 'get' this novel. It has strong themes like xenophobia will destroy the world and alternate paths won't necessarily save the world. It explores questions like, what is reality/authenticity and does it make a difference? Symbols abound as well - counterfeit items, technological devices, and (at the center of the story) an explosive novel by the Man in the High Castle himself. So while I didn't enjoy the book as much as I wanted to, I think it would make for a pretty good discussion with mature high schoolers who enjoy reading or in a junior college lit class. 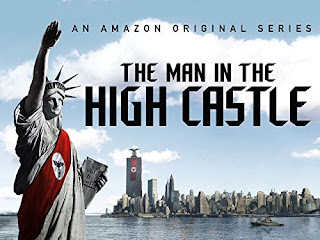 A major difference, then, between the novel and the television show is that there are no 'alternative history' films in Dick's original story. For those who've been watching the series on Amazon Prime, season one is all about discovering who the Man in the High Castle is and why he wants to collect all the various newsreels that are circulating alternative facts about the outcome of World War 2. So instead of films, in the book there is a 'novel within the novel' called The Grasshopper Lies Heavy (a biblical reference) which has many people agitated. It's a testimony to the power of propaganda, the power of the written word, the power of an idea which can (thus another theme) change the world.

As for the show itself, I'm really enjoying it. The characters are nicely developed (Childan especially, played by Brennan Brown, is one of my favorites), personal situations intersect with global events in meaningful ways, and the teasing out of the importance of the films and what they mean to everyone involved keeps the story line suspenseful. The series deals a bit with religion (a strong factor in Dick's novel), though is not heavy handed. Family and friendship are key elements as well. It's rated MA for mature and is a bit graphic at times, but it has very little skin showing. Lots more to say about the show, but to cut to the chase, I'd recommend it. The book, maybe 3 stars, but the series, 4 1/2. Hope season three takes us closer to a satisfying conclusion.
<><>
PS Subscribe to my sf/f newsletter and receive an e-book as a thank you gift.