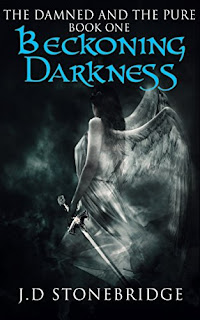 This angel/demon novel is not your grandfather’s Frank Peretti, that’s for sure! Author J.D. Stonebridge turns the angelic genre on its head, and that’s not a bad thing. But if you’re expecting a traditionally biblical take on the conflict between Heaven and Hell, you won’t find it in Beckoning Darkness. Be prepared for a mash-up of sorts, where angels and demons interact with monsters of every kind, including witches and doppelgangers. It’s really more of an urban paranormal story – a supernatural suspense novel – and maybe slightly YA (I’d say mature high schoolers would like it); and most urban fantasy fans will likely enjoy it.

However, Christian fantasy advocates might not be as pleased. In addition to a smattering of swear words (and a needless f-bomb), the premise is that something is brewing between the forces of Heaven and Hell. Maybe an alliance? Maybe an impending war upon the creatures of earth? All the main characters seem to have ulterior motives and it’s not clear who the “good guys” really are. Although certain expected angelic characters like Michael and Raphael do make an appearance, they come across as untrustworthy narrators because something is definitely amiss.

Like I said, the author is not presenting the traditional view that heavenly beings are automatically good and that their fight is against the demonic forces wanting to harm humans. We don’t know who is pulling the strings behind the scenes at this point. Which is a refreshing and suspenseful way to keep the reader’s interest, I have to admit. What we do know is that two misfits – one an Angel who has a blotted past and one a Demon with secrets of his own – are thrown together and used as pawns in a spiritual game, the nature of which we only catch a glimpse of by the end of the book.

Which brings me to a few critiques. First, be prepared to begin a series of novels (four books called The Damned and the Pure) if you want answers. The complete story arc is just getting started in this novel. That isn’t to say this slice of the story is incomplete; one key relationship (the Angel Ariel and the Demon Caelum) is certainly explored and comes to a somewhat satisfying hint of a conclusion, this being the set up to what I imagine will be their eventual coming together. (Yes, a bit of romance and unrequited love are involved too.) So if you absolutely hate cliff hangers, you won’t want to go into Beckoning Darkness as a pure stand alone.

The other critique, somewhat minor but worth mentioning because it opens the book, is that it starts with an unnecessary prologue. My advice is to just skip it. It almost had me putting the book down, but since I’d received a free copy of the novel in exchange for an honest review, I simply powered through it. So again, if you’re the type of reader who doesn’t like prologues (I typically don’t), just start with chapter one, you won’t be missing anything. There is plenty of action, however – spiritual battles, captures and escapes – right from the get go for those who enjoy that sort of thing. I found myself skimming most of those parts, but not because they weren’t well written, it’s just I don’t particularly care for fight scenes.

Overall, though, this is a solid story. Stonebridge can write and write well. The storytelling unfolds quite naturally. For example, the reader thinks the plot is going one direction during the opening chapters but then expands about a third of the way in, revealing a much broader landscape and more interesting plot scenario. In fact, Beckoning Darkness is interesting and entertaining enough that I might go ahead and buy book two in the series. Which is what pleases most of us readers (and the author), I imagine – an intriguing story that leaves us wanting to stay immersed in the world the writer has created. Four out of five stars, especially for fans of supernatural suspense.

<><>
PS Subscribe to my sf/f newsletter and receive an e-book as a thank you gift.