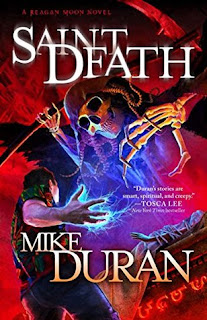 Reagan Moon is a paranormal investigative reporter and a sceptic. Or at least he used to be. But ever since having a tau (a cross-shaped magic totem) emblazoned into his chest, he's become more open to the reality of the supernatural realm. That, and he's personally met his guardian angel. Oh, and the fact that he has some innate but mysterious powers. After his adventures in Mike Duran's first urban fantasy novel, The Ghost Box, Moon has now become a reluctant believer.

So he's not completely surprised to discover, in Duran's second outing in this series, Saint Death, that there are others out there like him. They're called the Imperia, a kind of paranormal 'justice league,' a rag tag team of earth guardians charged with countering the evil forces slipping into the natural realm. And what a variety of evil forces there are to battle!

One of Duran's strengths as a writer is to pull back the curtain on a spiritual dimension that is usually treated, well, two-dimensionally, by so many others. In a typical urban fantasy there are werewolves and vampires galore, but in Duran's imaginings the paranormal realm is much more interesting and diverse. We're dealing with a truly evil realm that gives some real depth to the good vs evil trope so prevalent in the traditional horror genre. You get a sense when reading these encounters that the battle between heaven and hell really matters - even when the one fighting on the side of heaven isn't a confirmed believer.

When it comes to describing these climactic spiritual encounters, Duran shines. It's almost as if he's telling a 'been there done that' story (ever hear of 'write what you know'?) that brings the reader into the scene itself. Though this is not a Christian fantasy (it's written for the general market), a savvy reader will pick up on the supernatural realities and worldview the author holds to. It's subtle, but there. As it should be with most good storytelling.

In fact, Saint Death is the kind of story Left Behind could have been. No, it's not a post-rapture apocalyptic tale. But it hints at the demonic forces at work in our world today that are preparing the way for an ultimate antichrist. The novel is not heavy-handed. It's a story, first and foremost. But it has a bit of weight and a positive theme undergirding a kind of modified superhero quest adventure. Now about a third of the way in, it does bog down a bit with some background exposition and some predictable elements. But don't let that section fool you; keep reading and you'll realize half way through that there's a whole lot of story left that you had no idea was coming.

Note on Genre and Rating: Urban fantasy, paranormal noir, supernatural suspense. This is not YA, but mature late middle graders would enjoy it. Due to occult themes and swear words, I'd say it rates between PG and PG-13. Four and a half stars. Highly recommended for those who enjoy paranormal urban fantasy but are tired of the same old same old. (Note: I received a free advanced reader's copy of this novel from the author.)