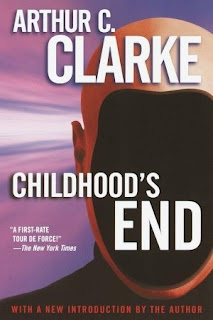 This is one of those novels from the Golden Age of science fiction that we're all supposed to revere as a classic. I think if you read Childhood's End as a teen (say pre-1980s), then you might still hold that view of it, but I think your memory is probably tainted. After all, there weren't a lot of thought-provoking, human destiny pondering stories out there way back when. But today, this philosophizing exposition-heavy treatise disguised as a story amounts to just a whole bunch of hooey. Having read this for the first time in 2016, I can safely say this novel's just shy of being a dud.

First, Arthur C. Clarke, frankly, isn't that great of a writer. Oh, he was groundbreaking and all (2001: A Space Odyssey, hello), and evidently as smart as heck (he helped develop the first communications satellites), but his style is stilted, talking-headish, and not very compelling. It's simply boring reading.

Second, Clarke's atheism is painfully obvious and hurts his story telling. This novel is about humanity's 'coming of age.' We're leaving our childhood behind and evolving to our next stage of existence - union with the universal mind. Meh. Utopia on steroids. Stop the presses.

But what's funny here is the underlying theme - the climax of evolution is pantheism! Funny how so many atheist writers deny God's existence and yet their ultimate vision of utopia is a kind of apotheosis. Tired drivel, and ultimately vacuous. Which is the main reason this story failed, it ended in nothingness.
<><>
PS Subscribe to my sf/f newsletter and receive an e-book as a thank you gift.