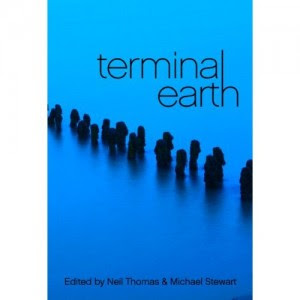 An Anthology of Apocalyptic Speculative Fiction...

What will you be doing when the shadows fall and the clocks stop?

From lovers watching firestorms in exotic island locales to strangers playing a last game of baseball in abandoned America; through the eyes of sentient robot hunters or businessman suicide bombers; in the strongholds of alien-built bases and across the body-strewn beaches of Asia; looking down from spacecraft and peering up from bunkers, the only certainty is that our Earth is terminal and we will look for a way to continue, somehow, somewhere.

Whatever narrative of the apocalypse you prefer, you’re likely to find your favorite poison in Terminal Earth, a new anthology of science fiction short stories from Pound Lit Press. Editors Neil Thomas and Michael Stewart have selected stories that focus not so much on how the world ends as on what people do about it, and this might inspire contemplation of the reader’s own response to the terminal scenario. Would I put up a fight, meekly accept my fate, work on my “bucket list,” or just stand there with my mouth hanging open, wondering what happened?

There are twenty-three tales of humanity’s twilight here, from the mundane to the bizarre, so settle down into your bunker, pop open a can of Spam, cue up The Doors on your MP3 player (I recommend “Riders on the Storm” or “The End”) and watch it all burn, freeze, explode, assimilate, or simply wink out of existence. I love short fiction, especially short science fiction, and there are some pretty good stories in this collection.

In "Fields," by Desmond Warzel, mankind literally goes down swinging in one last World Series before Earth is consumed by mutant wheat. Didn’t see that coming. It’s a bittersweet tale with a lot of heart, told by a homeless African-American man who finally discovers a place he belongs, just in time for the end of the world.

Barry Pomeroy’s "First at the Dump" takes us to a community of scavengers who find something unusual in their post-apocalyptic landfill. Perhaps their island isn’t the final outpost of humanity, and the world isn’t ready to end quite yet.

Two people ponder Earth’s final sunset from a balcony, naked, in Frank Rogers’ "As the Sun Sets." Not so much a story as an extended meditation on the ultimate futility of mankind.

David Turnbull posits a world subjected to death by...wait for it...tattoo, in a story sensibly titled, "Tattoo." Didn’t see that coming, either. Most of the story is spent explaining what happened, and waiting for the inevitable result, but there is some cool imagery along the way. I won’t be “getting ink done” any time soon, thank you very much.

Next is "The God Complex," by Neil John Buchanan. Alas, we should have known better. A probe searching for traces of God in the remnants of the Big Bang returns to mankind bearing delusions of God-hood, with predictable results. Standing between us and total assimilation is one woman in symbionic armor. Nifty, emotional, and spine-tingling.

A neighborhood committee attempts to maintain normalcy in the face of a cosmic catastrophe in Neil Coghlan’s "Outstanding Matters." They succeed about as well as any homeowners’ association. A gentle, sad story of good people clinging to the mundane for comfort.

Circumventing the end of the world via time travel may require more than one attempt and a little bit of good fortune in Jonathan D. Harris’ "Lucky Heather." Make that a lot of good fortune.

The world ends not by fire, but by ice, in Scott Davis’ "The Cooling Sun," but it may be history repeating itself.

Andrew Hook’s "Jump" provides a rather odd solution to the classic “planet-killing meteor” scenario that founders on a rather mundane impediment. I didn’t find the plan to save Earth plausible, but the story does illustrate the human tendency to grasp at straws in a desperate situation.

From a certain point-of-view, the end of the world might not be a bad thing at all. In Bill Schwarz’ "The Tipping Point," it mostly puts everybody's priorities in order.

Human society is pushed into the abyss with chilling ease, aided by an odd little bit of synchronicity, in Simon Hood's "You Can't Force an Owl." Perhaps the scariest story in the collection because we’ve already seen it happen on a smaller scale.

Mark Romasko offers a brief intermission with his poetic conversation, "On a Beach at the End of the World."

Speaking of beaches, Donna Burgess clues us that if dead things start washing up on the beach en masse, you might be approaching the apocalypse, in "Light at the End." In light of the odd bird and fish die-offs of recent weeks, this one seems eerily prophetic.

"The End of Dave," by Jamie Marriage, isn't cause for anxiety--it's just another corporate restructuring, though this one is a little more comprehensive than most. If you're quick on your feet, you might just end up running the whole firm. A lighthearted tale, in the spirit of Douglas Adams and Terry Pratchett.

It's back to the beach with Alexander Zalanyj's "The Fire We Deserve," in which two people witness the fulfillment of a planet-scorching dream.

The only thing worse than experiencing the end of the world might be surviving it, as N.E. Chenier reminds us in "Fragment." This is a tale of madness--gory and sexually explicit, not for the tender-stomached.

A starship carries the hope of mankind from a dying Earth--but something else doesn't want to be left behind, and doesn’t care at all if we survive, in Amanda Taylor's "The Gloss of Midnight."

In Eric Ian Steele's "Cycle," there's not much left to do but wait to be eaten by a very large monster. From one very particular point of view, this is progress.

A young man, abandoned as a child to a life of hard labor in space, returns to Earth--what's left of it--to confront his parents, in John Atkinson's space-opera-ish "Homecoming."

Soldiers ride out the apocalypse in an underground bunker, but they aren't prepared to handle what's waiting for them outside. Natalie J.E. Potts brings the claustrophobia and paranoia in "Beyond Black."

"A Quiet Pint at the End of the World," by Robert Long, is just that--two guys share a drink in a pub and talk about a girl. It might be the likeliest future vision of them all, if not the most exciting.

Pesky humans are full of surprises as they maneuver through an alien warehouse under the watchful camera of a jaded security guard, but what do they want? Erick Mertz provides the answer in "The Beautiful Room is Empty," but despite an intriguing premise, the ending felt a little, well, empty.

Finally, "Pa's Worm Farm," by Jamie McNabb, treats us to the dreariest apocalypse of all--the Green Apocalypse. Honest farming folk just can't catch a break in the Brave Gaian World, but country boys will always find a way to survive and prosper--even if it means eating worms. Some homespun laughs here, but it’s all rather bleak when you look beyond the caricatures. I would have preferred finishing up with something more hopeful and uplifting after watching the world end twenty-two different ways.

Ah, well...you can’t have everything, even if you’re the last man on Earth. Terminal Earth is a nice assortment of apocalyptic sci-fi shorts. Overall, I think it could have used a couple more action-oriented stories and a couple less depictions of humanity talking itself to death, but if you’d rather ponder the world’s end than fight the future, don’t wait until 2012 to pick up a copy of this book.

from Pound Lit Press and I asked Fred Warren to share his thoughts.

I saw this promoted elsewhere and grabbed a copy. It's different, probably one of best few small press collections I read in 2010. I feel Fred makes many of the stories sound "dull" and that does them a huge disservice. It's a smart collection of stories and in fact, I'd say the weaker pups of the litter are those that go for too much stereotypical action. Definitely worth a read, as Fred rightly concludes.

Thanks for your feedback. This is what a well-rounded SF collection does - provides different readers with a variety of stories to enjoy.

That's a fair criticism, Anon, and "dull" really wasn't what I was shooting for in my review. The stories *are* weighted toward a contemplative approach to the end of the world--people trying to make sense of what it all means. Thoughtful isn't boring (my favorite story was "Fields"), but it doesn't move real fast, either.

The subject matter is by nature pessimistic. Hey, it's the apocalypse, after all, and you know what you're in for. It left me feeling a little beat down after 23 stories, and I needed some "sunshine and puppy dog" time after I was done.

Fred, I didn't think it was an unfair review at all, just one or two sentences I felt were unfairly critical, but hey, that's what subjectivity is all about, right? The thing that impressed me with this collection was that, on the whole, it was a very "smart" bunch of stories. Apocalyptic and post-apocalyptic collections can often descend into zombie fests, mad max mayhem or so forth and this anthology very rarely did. In fact, I can count on the fingers of a maimed hand how many stories even hinted at going down that avenue. All in all, fair review and a justified recommendation for one of the most intelligent collections of the year. And yes, you're right, don't pick this one up if you're already on the window ledge and there are people below you with megaphones!

This is an exceptional anthology. Finished it in two days. So many clever slants. From ink nanobots to having a quiet beer, this anthology has everything. I've found my mind going back to so many of these stories, so many of the lines and images return to you when you least expect it: the security team closing in on the couple in The Beautiful Room Is Empty, the numerology in You Can't Force An Owl, Max's refusal to let savagery into the condo in Outstanding Matters, the worms munching just below the surface in Pa's Worm Farm. And so many more.

I grabbed this collection thanks to the recomendation on this blog. Thanks for a great tip.

Speculative Fiction from the Seven Stars Cover Art © S Perry
ResAliens Blog is a speculative fiction zine and review site. I'm happy to consider reading your indie published project, but I can't guarantee a review. Query me, Lyn Perry, via TuleFogPress at gmail dot com with some info and I'll get back to you.