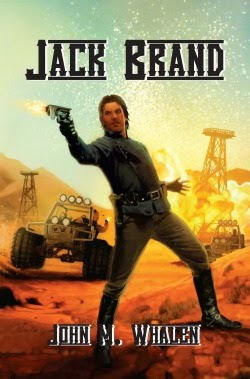 by John M. Whalen
Review by Keanan Brand (no relation!)

(Note: After receiving a free PDF of this collection of short stories from Pill Hill Press, I asked fellow editor and avid spec fic reader Keanan Brand to write a review. Thanks, Keanan! - Lyn)

Once an Army Ranger then a member of the Tulon Central Security Force, Jack Brand is now an independent contractor not averse to the occasional bounty hunt or good deed. He's also the title character in Jack Brand, a novel by John M. Whalen.

I first encountered the Jack Brand stories within the electronic pages of Ray Gun Revival, an online science fiction magazine devoted to space opera. However, there's as much or more Old West adventure as there is science fiction in these tales – although, to tell the truth, much of the Old West mythology is as operatic as anything in classical literature. But that's beside the point. Want a novel with kidnapping and double-cross, revenge and mystery, adventure and rescue, and maybe even a little heart? Then Jack Brand is your kind of read.

As a kid, I devoured books like this, and was a huge fan of Zane Grey (mom-approved), Louis L'Amour (marginally mom-approved), and Max Brand (not approved at all). There were other Western writers I read, but their names escape me. I do recall having to go search for my library books sometimes; Dad was a L'Amour fan as well. So, when I found the Jack Brand stories, it was little like finding childhood again.

But don't get me wrong: these aren't bedtime stories. If they were movies, I'd give them a PG-13 rating, mainly for violence. They form an episodic novel, and each chapter can be read as a stand-alone short story, but there's a through-line, an overarching plot, so reading the chapters in order is best. So how about a sample?


"Are you happy now, Mr. Brand?" Myra said. "Now you don't have to worry about not getting your full share of the reward. It's all yours...You just proved that you're no better than anybody else. All you want is money."

Brand stood up. If her little tirade bothered him, he didn't show it.

"We've four hours of daylight left...For what it's worth," Brand said, "I didn't know about the reward. And the reason I killed those three wasn't money. Dancer wanted to settle an old score. Even if I'd turned you over to them, they'd have tried to kill me anyway. And if they'd succeeded, they would have had to kill you, as a witness to murder. Your father made a mistake making that reward dead or alive. They wouldn't have had anything to lose if they killed you."

She didn't know what to say. She wasn't sure she believed anything he told her.

The answer to Myra's questions arrives in a dandy little reveal at the end of the first chapter, and it's the mystery that pushes Brand onward.

Chapter 2 ("Kiss Me Now, Kill Me Later") reminds me of an Indiana Jones adventure, complete with old friends with dodgy loyalties, and Chapter 3 ( "...In the Waste Howling Wilderness...", a reference to Deuteronomy 32:10) is a good weaving of faith with story, yet without being preachy or heavy-handed. Reminds me a little of the John Wayne classic Angel and the Bad Man, in that a dangerous man is taken in by a family after he is too wounded or ill to carry on. The family is part of a religious, pacifist sect that doesn't believe in violence of any kind, yet need Brand to rescue them from violent men.

Though vocabulary such as Synth-Veg bars (nutrition, Synth-Coke (cocaine), Synth-Brew (beer), and Synth-Turkey (lunchmeat) can be annoying after a while – does no one on Tulon eat anything that's real anymore? – and though I quickly wearied of all the capitalized hyphenates (Strato-Van, Strato-Sled, Hover-Jeep, Electro-Rifle, and more), some readers might argue that the proliferation of such words and names gives the novel its pulpy goodness.

In addition to the first three highlighted in this review, there are nine more chapters of Jack Brand's adventures with such titles as "The Eight Arms of Death" and "The Secret Treasure of Dar-Zul." Plenty of fun for readers who like their books the same way candy-eaters like their Reese's: a meeting of two good things. In this case, the Wild West and the wild reaches of outer space.

And, hey, Christmas is coming. Jack Brand would make a great gift for your favorite reader.