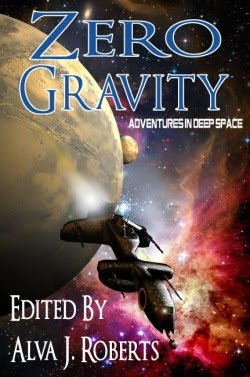 Guest reviewer, Fred Warren (author of The Muse and blogger of Frederation) takes a close look at Zero Gravity: Adventures in Deep Space

, published recently by Pill Hill Press. And he comes away fairly impressed. Here's what he has to say:

If you love stories about lone-wolf pilots, sentient spaceships, interplanetary power politics, rogue computers, lost colonies, and Terrors From Beyond, Zero Gravity, a new anthology of science fiction adventures from Pill Hill Press, will light your boosters and shove you deep into your acceleration couch.

To infinity! And...well, you know.

Anthologies are often a grab bag of stories that don’t quite fit together. In Zero Gravity, Editor Alva J. Roberts has selected 13 short stories that coexist nicely—they all have a space opera-ish feel to them, a “new frontier” spirit embodied in a human race beginning to extend its boundaries into near space and beyond. The authors pay tribute to a variety of intrepid explorers, adventurers, and entrepreneurs—people of courage, determination, and ingenuity. We witness wonders, and horrors, in those dark, lonely places between the stars.

Zero Gravity leads off with “Junkers Fancy,” by Rosemary Jones. It’s the winsome tale of a young salvager living by her wits among the asteroid fields between Jupiter and Mars who discovers something unexpected in a wrecked spaceship. A feel-good story with a spunky heroine and a hint of romance.

A smuggler runs into trouble when his metahuman cargo escapes from a sealed compartment, in Scott W. Baker’s “Leech Run.” Leeches drain electrical energy—a dangerous ability that has marked them for genocide. The missing leech seems to have plans beyond safe passage to a friendlier star system, and if Titan doesn’t figure out what’s going on, it could cost him a lot more than his commission. A locked-room mystery that introduces an intriguing universe and characters that deserve more exploration.

The mystery of a derelict ship and its suicided crew takes a bizarre turn when the investigators’ shipboard computer discovers love in “A Space Romance,” by Paul A. Freeman. An interesting twist took this story in an unusual, and, I think, better direction than the beginning implied.

“Hawking’s Caution,” by Mark Rivett, reminds us there’s a chance we might not like what we discover in the search for intelligent life beyond Earth. Beginning with a frantic warning message, the story then flashes back to the events that spawned the message, as an exploration team leapfrogs across the galaxy using a new teleportation technology. The ending had a Twilight Zone flavor, but the final reveal lacked impact—the beginning of the story gave away too much of what was to come.

A solitary hitman and his salvaged droid could be the last hope for a spaceborne community ruled by powerful criminals in David Shembri’s “Parhelion.” Though the setting was interesting, this somber story didn’t quite come together for me. The cynical tone undermined the optimistic ending and left me with serious doubts about the hero’s chance of success.

In Kenneth Mark Hoover’s “To Stand Among Kings,” a political crisis challenges the wisdom of a Papal inquisitor plunged into a struggle among rival human and post-human societies—but the future of all humanity may ultimately be decided by the most unlikely sacrifice of all. There’s a lot of byzantine intrigue in this story, but a nice payoff at the end—and some questions to ponder about what being human really means.

In “The Unicorn Tree,” Alethea Kontis tells the story of a young artist sent to recover a legendary treasure from a blasted, dying world. To her surprise, she discovers she has more in common with the survivors than she ever imagined. Not a lot of action in this one, but plenty of heart. Like “Leach Run,” this felt like an episode in a larger story worth telling in full.

A ragtag fleet of human and alien vessels from twenty worlds flees an unspeakable horror in “A Beacon of Hope,” by Gregory L. Norris, but is it all an illusion? A young woman must choose whether to continue the mission she’s trained for her entire life or join a revolution led by a charismatic rebel. A good story, but it’s plucked from the middle of a desperate multispecies exodus across hundreds of years, and we see neither the beginning nor the end of that journey.

“Tangwen’s Last Heist” by C. B. Calsing tells the tale of another lone-wolf adventurer living one step ahead of the law. She’s offered absolution in exchange for handling an awkward situation for the authorities, but she discovers there’s more than one side to the game she’s entered, and if she’s lucky, she might only end up dead. I thought Tangwen was a great character with plenty of attitude, but the conclusion, though satisfying in its own way, didn’t quite fulfill the promise of this story.

A crewmember on a long-range planetary survey mission awakes from stasis and discovers something’s very wrong with the ship and the telepresence androids operating it. Or is the problem in his own mind? Peter Butler’s been living in a virtual reality dream world for so long, he’s having trouble distinguishing between truth and imagination, and the tug to return to the comfortable world of semi-consciousness is powerful. Gef Fox spins a convincing web of paranoia in “The Stand-Ins.”

Will Morton’s “Glacier Castle” takes us to a world of eternal ice and snow—and one woman’s obsessive plan to save a doomed colony. In a story reminiscent of Moby Dick, Morton explores the fine line between genius and madness and the human drive to survive despite impossible odds. A good read.

In Margaret Karmazin’s “Rescue,” a mishap in space strands a pilot on a dead alien world that proves to be not quite so dead after all. Something’s stirring outside Kasi’s crashed spaceship, and it’s trying to get inside. A moderately-interesting first contact story that, unfortunately, didn’t venture very far beyond the first contact.

A rescue team intercepts a space freighter speeding toward uncharted space. It’s broadcasting a quarantine warning, it’s full of corpses, and the ship’s computer, Zeus, a sophisticated artificial intelligence, is the only survivor. Is Zeus responsible for the mayhem, or is there a subtler danger lurking within the ship? Murray Leeder’s “At One Stride Comes the Dark” is a whodunit, a horror story, and an exploration of the potentially hazy boundary between programming and sentience that kept me guessing until the end.

Overall, I found Zero Gravity a very solid collection of science fiction stories. While I was impressed with the variety and compatibility of the stories in this anthology, the attention to detail could have been better. There were an annoying number of misspellings and other typos in my electronic review copy, though they may have been fixed in the print version. The cover art is attractive and could double as an illustration for most of the stories in this anthology.

Blog Owner's Note: ResAliens Press received a free PDF review copy of Zero Gravity and asked Fred Warren to review it. You may purchase your copy here of Zero Gravity: Adventures in Deep Space, edited by Alva J. Roberts (ISBN-13: 978-1617060007 - Available for purchase in print or Kindle at Amazon.com.)

Glad to see you enjoyed the book, Fred, especially the story I wrote for it. My first foray into sci-fi, so I'm glad it's been met kindly so far.