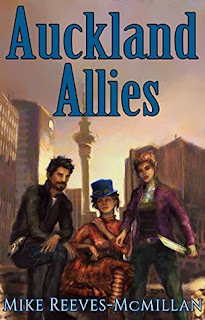 Teens with magical powers, contemporary urban setting, good v evil subtext - all expected elements of your typical YA lit that's out there today. But somehow Auckland Allies by Mike Reeves-McMillan is different. Better and refreshing. First, it's set in Auckland, New Zealand, so there's a bit of out-of-the-ordinary feel to the story right off the bat. Which is good. Then, the characters come across as real and their magic isn't a superpower substitute so the predicaments and solutions the 'allies' go through are realistic as well. And overall the storytelling is clean, maybe a few swear words, but refreshingly not "new adult" which is a sad trend in a lot of contemporary YA (i.e., the inclusion of sex and swearing for no good reason). Fortunately, I could recommend this book to middle and high schoolers alike without embarrassment.

As for the writing, it's solid. I enjoyed the 1st person snippy narrative of Tara, whom I consider the main character. I just wish the whole story was told from her POV. Instead, the book alternated between the three friends, all in the 1st person, and it got confusing at times. I'd put the kindle down then pick it up a few days later and forget who's telling the story at that point. And like a lot of books, it started to drag in the middle. Once the situation was figured out and the solution was in sight, the "getting there" was a bit on the slow side. But overall, a pretty quick read and enjoyable.

One more thought: I don't want to sound overly critical, but the cover art didn't grab me at all, nor did the title. If this was on a shelf at B&N I would probably have skipped it altogether without a second glance. Which has me wondering how I picked up the ebook in the first place. Maybe it was a gift, maybe part of a story bundle, maybe just a random purchase to support indie writers (which I recommend, btw). But after reading this, I'm inclined to see what the rest of the series holds. (Three books in this series, I believe, all stand alone novels.) Which is what all writers want, right? Us coming back for more? So three and a half stars for this one and recommended if you like clean, not too heavy, urban magic novels.
<><>
PS Subscribe to my sf/f newsletter and receive an e-book as a thank you gift.