Review of Child of Two Worlds by Greg Cox 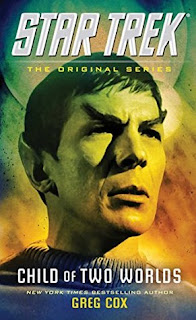 It's been a long time since I've read a Star Trek novel, and, fortunately, I picked a good one for my Christmas present to myself upon my return to the Star Trek universe. It's a Spock and Captain Pike novel, the captain of the Enterprise before Kirk, set just a few months after the events detailed in the series television pilot, "The Cage." This story entails Klingons (both the more human looking but genetically malformed from TOS, and the more aggressive looking warriors we all know and love), an out of control virus aboard the Enterprise, and a thwarted mission of mercy. Good stuff.

Greg Cox is a solid writer; the plotting is strong, the story engaging (though the explanatory sentences that regularly pad the paragraphs were at times a tad much), and the familiar characters were nicely drawn. It's a fast read, nothing surprising there. Full of action, adventure, repartee, and subtle in-the-know quips and references - including an expendable ensign, Spock's implied future with a new captain, and a medical staff person who says, "I'm a nurse not a doctor." ;)