“Amira,” the old man croaked, his once-rich baritone barely loud enough to carry beyond the bedroom. The effort cost him a series of wheezing coughs, and he collapsed against the pillows. His head felt strangely tight and heavy.

The door squeaked, and the sorcerer expected to see his wife with the luncheon tray. Her comforting words and sweet smile would be a welcome distraction from his aching joints.

Instead, a blonde vixen sheathed in folds of amber silk stood on the threshold. Her smile faltered when she saw him, then returned full force. He tugged together the remnants of his magic, knitting them together, but he was long out of practice. Her gifts pressed against his hastily constructed shields, invisible fingers ferreting out every dent, every crack.

Her voice lingered over his name like a particularly fine treat. She strolled into the room, taking in the plain wooden furniture and rag rug with a disdainful sniff. Her haughty expression reflected every imperfection – a rip in the patchwork quilt, drooping flowers on the bedside table, a dressing gown made of cotton, not silk. At least the room was scrupulously clean. Amira sentenced all dirt and cobwebs to death by dust mop.

He clenched his hands to quell the age-shakes and sat straighter in bed. Though it had been at least fifty years, she still carried the bloom of youth in her smooth skin and pink cheeks. Time had, however, sharpened her gifts since the last time they met.

“You’re a vision of the past, Viola,” Brand finally said.

“You look...” Viola arched an eyebrow. “...as if you’ve lived an eternity.” She perched on the edge of the bed and swept her skirts around her.

“Why are you here?” he demanded.

“Is that any way to treat your oldest friend?” Viola’s blue eyes widened with wounded innocence. If Brand hadn’t seen her practice that expression in the mirror countless times, he might have believed it.

“A true friend wouldn’t have abandoned me.”

“You chose to leave.”

Brand’s head throbbed as he struggled to shore up the chinks in his defenses. “If you cared for my happiness, you would have supported me, not forced me to choose.”

“Was it worth it?” Viola snapped. Her façade cracked enough that he knew his gifts still had kick, though he hadn’t played the Game in decades. Or perhaps it was that Brand knew Viola’s weaknesses. After all this time, they were still there, hidden, unless one knew where to strike.

“Tell me!” She leaned forward and the familiar scent of lavender wafted over him. “Was marrying that powerless babe-in-arms worth the sacrifice?” Her fingers brushed his wrinkled cheek. “Look at what you’ve become.”

“I love Amira!” Brand jerked away from her touch. “Every day with her is a treasure.”

“She can’t challenge you, and she couldn’t play the Game if she wanted to. Amira is beneath you,” Viola spat.

“Name me one gifted coupling that lasted half as long as my marriage to Amira,” Brand challenged. “Not you and I. Not you and Thom.”

“James and Florin.” Viola sat back, her chin raised with superiority as she named the leaders of their gifted family.

“And how many consorts have they each had?” A flush stained Viola’s cheeks, telling Brand he’d guessed correctly - Viola had warmed James’s bed. “I wasn’t interested in that kind of marriage, or that kind of life.”

Viola closed her eyes; when she opened them, the playful kitten had returned. She removed a velvet pouch from the folds of her gown, and the ambient power in the room increased tenfold, firing all Brand’s senses. The world sharpened until he could see each feather on the geese flying past his window, hear the brook racing outside, and smell the pine needles from the forest.

“The question is,” Viola purred, “what kind of life are you interested in now?”

She tugged the drawstring, and a jade ring tumbled into the palm of her hand. The essence of the ring pulsed, begging him to slide it on the middle finger of his left hand where it belonged. He knew it would fit perfectly - he’d carved the ring with his own gifts, his last act as an apprentice.

Though it physically hurt to look away from his ring, Brand forced himself to meet Viola’s gaze. “Why did you bring that here?”

His ring lay in her palm, brushing the similar ring on her middle finger. Viola’s ring had been carved from ivory.

“You’ve had your little adventure, Brand.” She spoke slowly, as if to a child. “You grew old with your servant wife. You had your children, and they ran off to the cities and universities, leaving you alone.”

Viola dangled the jade ring in front of him. “Your real family is still here, waiting. This will restore the full measure of your gifts. You can have everything - the Game, challenges, youth, beauty. No more of this magical half-life and self-imposed exile.”

Brand pictured himself strolling back into Exentia Castle on Viola’s arm like he’d never left. He would wear silk robes again and sit at Florin’s right hand. He could visit the far-flung lands and play the Game with masters.

But he would never be able to come home again, to this house that he and Amira had built together. Brand couldn’t imagine a world where Amira died and he went on.

When he clasped Viola’s hand, her fingers trembled. Brand curled them around the ring, muting its power slightly. “Keep it. I’m not that man anymore.”

“No.” Brand closed his eyes and lay back, letting the clean scent of his pillows overwhelm the lavender. “I can’t.”

“I don’t want you to die,” Viola whispered. A tear spattered on his hand. He felt her gifts tremble, like a pulsing wound, and knew her grief was genuine, but when he opened his eyes, her features had frozen in an imperious mask. Her final move.

“I’m sorry, Viola, but I will die. Not for a while yet, God willing, but it’s the fate I chose for myself.” Another tear spilled over her thick lashes. Brand wiped it away.

She flinched, as if his touch burned. “Selfish bastard! You deserve to rot in the ground.”

Brand sighed, unable to find pleasure in the win. “Give Florin and the others my regards.”

Without another word, Viola swept from the room, taking her gifts and the pressure on his aching head with her. He felt spent, as if she’d stolen the last of his strength, and drifted into a troubled doze.

Brand forced his eyes open and smiled at Amira. He knew every curve of her face and each strand of silver in her once-black hair. Then he worried - did she mean Viola? But Amira would never talk of Viola with such joy.

“Who?” Brand noticed she’d refilled the vase on the table with fresh irises from her garden.

“Simon and the twins. They’re staying a fortnight.” She twitched the quilt straight. “Isn’t that lovely?”

“Lovely,” Brand replied, his smile wan as he juxtaposed the pain of making it downstairs with the fun he would miss if he stayed in bed.

Amira brushed his lips with hers, startling him from his gloomy thoughts. “Thank you.”

“You deserved the right to choose for yourself.” Her chin trembled. “I want you to be happy, and if it means leaving...”

Brand stroked her hair. “You make me happy, even when I’m a crotchety old fool.”

“I brought something for you.” Amira took a packet from her apron. Inside were several creamy white blossoms.

“Milkflowers?” He squeezed her hand in gratitude. “Where did you get them at this time of year?”

“I have my sources.” She held one to his mouth. “Now take it. I know they make you feel better.”

He crunched the delicate petals, enjoying their sweet flavor. The aches and pains in his joints began to fade instantly. Amira slid her strong arm behind his shoulders and helped him to the edge of the bed, then to his feet.

“Let’s go downstairs,” she said, lacing her fingers through his. “The grandchildren are waiting.” 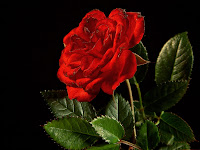 Erin M. Kinch lives and writes in Fort Worth, Texas, where she shares her home with her husband of almost seven years and an incorrigible golden retriever. Erin's short fiction has appeared in a variety of print and online publications, including Every Day Fiction, Allegory, A Thousand Faces, Electric Spec, Perpetual Magazine, and Sporty Spec: Games of the Fantastic. Visit her writing blog, Living the Fictional Dream, for a list of her published stories and random writing tidbits.