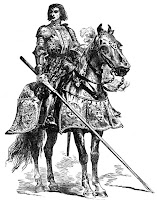 In the spring of my seventeenth year, I followed my half-brother Agravaine to Arthur’s court at Caer Tintagel. Summer would come early that year, and even in April, the heat beat hard enough to drive the King from the plains of Camelot to the cooler Cornish coast. I was glad of it; God knows that Tintagel, once home of my grandfather the Duke and my twice-grandmother Igraine, held as many cruel memories for Arthur as it did for me.

The King held court by the sea that day. As Agravaine and I pressed through the crowd, waiting for a chance to present myself to Arthur, the salt wind tangled in our blue-black hair. Our mother’s hair; the only thing that marked us two as brothers. My eyes, the deep brown of an owl’s wing in moonlight, had come from Arthur.

When our turn came, we knelt side-by-side on the soft purple tapestry someone had spread across the sand. Agravaine kept his eyes lowered, fixed on the clawed feet of Arthur’s throne. I met the King’s gaze unflinchingly.

“Agravaine,” Arthur said, in a voice as cool as the sea air. “Who is your companion?”

“Your majesty.” Agravaine dipped his head even lower. “This is Mordred, my mother’s youngest son.”

I was not sure, at first, that Arthur understood him; but then I saw his fingers clench on Excalibur’s hilt. A murmur rippled through the assembly. “Mordred—incest—his own sister—Merlin’s prophesy—Arthur’s murderer…” I smiled, my slow, sharp-toothed smile, to show the King that I’d heard and was waiting for his words.

He seemed to find some, roll them over his tongue, and discard them as useless. I widened my smile and did not lower my eyes. “Mordred,” he said finally. “Any son of Morgause is most welcome at my hearth. Ask anything of me, and if it is in my power to grant it, I shall do so.”

I wasn’t sure what I had expected—anger, perhaps, or scorn; at best, an aloof politeness—but generosity was certainly not it. Such was my startlement that I forgot, for a moment, not to bow.

“My King,” I murmured. “Your kindness if gift enough.”

His laugh sent a shiver down my spine—not only because it was unexpected, but because it could easily have passed for mine. Warm and cold at once, like the sea wind in April. “Nevertheless, I bid you accept something more. You need not choose now,” he added in a softer tone. “God grant we both have many years left on this earth in which to pay our debts.”

If it was not a dismissal, it certainly had the weight of one. Agravaine and I rose, bowed together from the waist, and took our places in the line of lords and knights on Arthur’s right.

Court continued through the heat of the day—knights seeking quests, wizards offering prophesies, young lords and ladies seeking permission to marry. One woman, with fey-white skin and hair like red clover, asked the King for a blessing to cure her barrenness. Agravaine shifted beside me, and I knew he was thinking of Guinevere, the childless queen he loved as fiercely as Arthur did. I shook my head at his folly, and at Arthur’s, but I wished the poor woman luck all the same.

The sun passed its zenith and the court was preparing to return to the castle when someone at the edge of the crowd began calling for Arthur.

“A trial, your majesty! Justice from the King!”

The lords and ladies took up the cry, parting like the red sea before Moses. I froze in place beside Arthur’s throne and watched as a small man with oil-black hair stomped up the aisle, dragging something behind him.

“My lord,” Arthur said, returning to his throne. “How may I serve you?”

The man flung his burden to the ground in front of him. It was a young man, perhaps a year or two my senior, with the reddish hair and dark eyes of the Welsh. His hands had been tied at the wrist, and a white cloth wrapped around his mouth—a gag meant for sending a message, not practicality. Most people, I knew, would interpret his firm expression as defiance; I knew it for fear.

“This boy is the son of my old serving maid,” the elder man said. “When your call came out for more soldiers to be sent to the plains, he attempted to desert.” His voice dropped to a conspiratorial whisper, and any respect I’d had for him vanished; I hated show-men. “He was headed towards Caer Morgana. It is my belief that he would have betrayed us to your half-sister, le Fay.”

A nervous laugh filtered through the gathered crowd. The suggestion seemed ridiculous, and I would have joined in, had I not seen the anger clouding the prisoner’s eyes. The accusation was true.

Arthur silenced the court with a wave of his hand. A weight settled in the pit of my stomach and, biting my lip to silence myself, I turned my eyes to the King. “And what would you like me to do about it, my lord?” Arthur asked softly.

“I am seeking permission to have him executed.”

I bit down so hard, my teeth drew blood. I could remain silent no longer. “Your majesty!” I cried, and felt the entire court turn its eyes to me. “Surely you don’t grant this, my lord? Anyone can see what is happening!”

Arthur frowned. “And what is that, sister-son?”

“He wasn’t trying to desert your army, my King. He was trying to escape his father.” I turned to the little man with a disgusted sneer. “Son of your serving maid, indeed! He has your eyes, you know. Has it taken this long for your wife to notice?”

“Enough!” the little man screeched. “Your majesty, do you make it common practice to allow squires to talk out of turn?”

The look Arthur gave me was almost helpless. “What would you have me do, Mordred? I cannot allow a deserter to live.”

“A King cannot execute a man out of common vengeance.”

“No?” The supplicant turned back to the king, giving his prisoner’s bonds a cruel jerk. “Then I amend my request, your majesty. If you can’t bear his blood on your hands, then I ask for your foolish squire there—Mordred, is it?—to do it in your name.”

“No!” I shouted. Agravaine caught me around the shoulders and held me back as I lunged. “How dare you…”

“What is it, princeling? Afraid to have blood on your conscience?”

The crowd seemed to appreciate the irony. I shrugged out of Agravaine’s grasp and stepped down from the dais, stopping less than an arms-length away from the black-haired man. I reached out, grabbed his dagger from its sheath at his side, and pressed it up against his neck. “No,” I said. “I will do it.”

I shoved him away from me went back to kneel at the foot of Arthur’s throne. “My King, I have chosen my favor, if you are willing to grant it. I will kill this man in your name, but I ask permission to do it out of sight of this vulgar crowd.”

Arthur nodded his head slowly. I suddenly realized how very weary he looked.

“Very well,” I whispered. For the first time, I took a good look at the prisoner’s face. He was a handsome boy—it must have come from his mother’s side—and there was a certain dignity in the way he knelt, as if he was doing it by choice. The gag was loose enough, I noticed, that he could have spoken if he wanted to. He had chosen to remain silent.

“Someone take away that gag,” I said. “And loosen his bonds. Dear God, he’s not some animal to be lead to the slaughter!”

“How very brave of you,” the supplicant sneered. I ignored him. When no one else moved to remove the gag, I took it away myself and, being careful not to touch the prisoner, lead him up the cliff to the rocky ridge behind Caer Tintagel.

“You’ve never killed anyone before, have you?”

They were the first words he spoke to me, as I slid his father’s dagger through the ropes around his wrists. It was hard cutting, and life as a noblewoman’s son had not taught me much about applying my strength. With a sigh—and strangely enough, a smile—the young man shifted his hands to give me a better angle.

“No,” I said, pulling the blade up. The bonds fell away from his hands. “Why? Do you plan on appealing to my sense of innocence and mercy?”

“Arthur’s court doesn’t seem to think you have one.”

I laughed at that, a laugh they could probably hear down at the sea. No, they didn’t think I had one; they were too foolish to separate a man from his destiny. “What’s your name?” I asked.

“Ywain,” he said, narrowing his eyes.

“Do you believe in fate, Ywain?”

Fully a head taller than me, he had to bend significantly to look me in the eye. “I believe in Merlin’s prophecies.” He paused for a moment, considering. “But not in fate.”

Good, then. Perhaps he would believe me. “Whether I am meant to kill my father or not, I am not a murderer,” I said. Then I handed him the dagger. “Remember that. If Merlin’s prophecy comes true, and Arthur and I are dead…”

“Mordred.” Ywain lay a hand on my shoulder. The touch was so unexpected, I nearly flinched away—but I didn’t. “I will remember.”

He took the dagger and slid it across the palm of his hand, wetting it with blood. “Take this to the King as proof. I won’t need it where I’m going.”

“Where are you going?”

“I don’t know.” A mischievous glint came into his eyes. “Maybe Caer Morgana. Shall I say hello to your aunt for you?”

I laughed again, this time with warmth, and clasped his hand on impulse. “Good luck to you.”

I watched until his shadow vanished into the rocks of Tintagel. Then, dagger in hand, I went down to see the King.

Speculative Fiction from the Seven Stars Cover Art © S Perry
ResAliens Blog is a speculative fiction zine and review site. I'm happy to consider reading your indie published project, but I can't guarantee a review. Query me, Lyn Perry, via TuleFogPress at gmail dot com with some info and I'll get back to you.