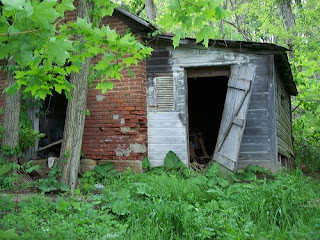 In the twilight, a brazen wind rushed over the choppy lake, battering the worn clapboard siding of the house. Brightly hued maple leaves, hapless in the gust, slapped wetly against a cracked kitchen window.

Inside, Beverly hiked up a velvet dress and brought down her heavy heel, snapping a leg off an overturned chair. She tossed the splintered limb into the fireplace while a dimpled, cast iron pot simmered over the coals. With bulbous and arthritic fingers, she tightened a shawl around her shoulders.

It had been thirty-three years since Richie’s disappearance. Beverly never remarried and each October she faithfully drove out to the old lake house and cooked a big meal to celebrate their anniversary.

It was the same meal each year and it was Richie’s favorite: Jambalaya. The rice, shrimp and chicken were easy enough to gather, but the final ingredient always posed a problem and had to be special-ordered in advance. The local grocers fumbled with the pronunciation of Andouille sausage so it wasn’t a surprise they never carried it. But Richie always insisted. He said it kept him young.

Beverly stirred the blend with a long wooden spoon. She closed her eyes and thought of Richie.

He’d been a small, skinny man with round blue eyes and a crooked smile. Beverly was wide and strong and she liked to scoop him up and carry him everywhere. It used to make him laugh.

“I’m making your favorite,” she said, lingering in reverie. “And I made sure to get the Andouille.”

A sudden pain gripped her chest and raced down her arm. She slumped heavily against the warm stone of the hearth. For an anxious moment her body trembled. A pulsing drum beat inside her, frenetic at first then quickly tapering off. Her body stilled.

Through the front windows, a set of headlights slashed across the room and spotlighted an old picture of Richie and Beverly hung crooked above the kitchen sink. It was from their honeymoon at Niagara Falls.

Beverly wore a yellow raincoat. Richie sported a hat that read, “Richie Loves Beverly.” With thick legs planted and back arched, she cradled him in her arms. Both flaunted ridiculous, sodden grins.

Six months after the honeymoon, he vanished while hunting moose in northern Maine. Never a trace was found.

The headlights flicked off and the picture went black. Through the wind came the muted thud of a car door. Beverly waddled to the front of the house, choking a brass stoker in her beefy hand.

“Who’s there?” she demanded.

But no answer came; only the whistling wind.

“Answer me or I’m calling the police!” she said, thumping the floor with the stoker.

And then a voice, small and familiar, seeped through the door.

“Open up, Beverly,” he said. “The wind is mighty cold out here and I can smell Andouille.”

The stoker slipped from her fingers and clanged at her feet. She nervously flipped the latch.

A scrawny hand, assisted by a corpulent breeze, swung the door open into the room. A lean face hid beneath a timeworn hat that read, “Richie Loves Beverly.”

Her legs buckled and she collapsed.

Richie held her head in his lap and stroked her ruddy cheeks. Candlelight made small shadows dance mischievously around the room. Her eyes strained.

“Richie? Am I dreaming?”

“No, Beverly. You’re not dreaming.”

She tried to sit up but the hard, internal resonance of a beating drum held her down.

The soft, sweet sound of children giggling came from the kitchen. Beverly stiffened.

“What is that, Richie? Who’s here? What’s happening?”

Richie held her hand and soothingly hushed her.

“But where have you been all these years? I never thought I’d see you again.”

“I’ve been with the children all these years, baby.”

“But we never had any children, Richie.”

The giggling intensified and then stopped. Light burst into the room from every window. Beverly shielded her eyes and wept.

“I don’t understand,” she said.

He helped her to her feet. She could see him better now and he was young as she remembered him.

Her hands moved self consciously to her thinning gray hair, but instead touched upon a silky thickness she hadn’t felt in decades. Richie smiled.

“Neither have you,” he said.

The deluge of light that flooded the room carried with it a piercing tranquility like love. The visceral pounding within Beverly now moved to a serene rhythm and she swept Richie into her arms.

“I knew you’d understand,” he whispered.

The children came from the kitchen carrying heaping bowls of Jambalaya. Each had straw colored hair and striking blue eyes. They were dressed in small suits and summer dresses that poorly concealed the writhing wings on their backs.

Cradling Richie as she had done years before, she followed the children to the door, moving past the glowing embers of the fireplace and the lifeless old woman who unknowingly basked in their radiance. 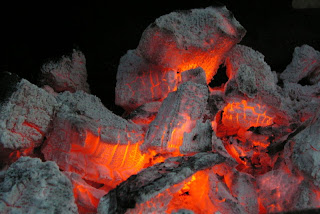 Mel Bosworth lives and breathes in Massachusetts. He enjoys writing, eating, rolling around in maple leaves and sleeping. He can be reached at meljb77 at gmail.com.

++ +++ ++
Discuss this story now at ResAliens Forum at SFReader.com.

(Photograph of 'Old Shack' by Connetta VanMatre, used by permission.)
(Photograph of embers by Jens Buurgaard Nielsen from Wikimedia Commons)