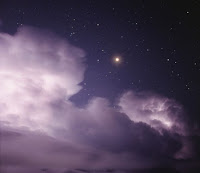 It was a dark and stormy night. Yeah, I know. But it really was. Very dark and extremely stormy. The high winds had spawned a cluster of tornados that were rampaging across the countryside not enough miles away from my house, and they'd taken out a couple of electric substations. Which explains the dark.

I'd been pacing the floor with a battery powered radio pressed against my ear for almost an hour, listening to nothing - and hoping for a weather update that wasn't likely to happen - while debating whether I should hide in the bathroom under my mattress.

That's when the light dawned. Literally. A brilliant beam of light speared through my front window accompanied by blaring loudspeakers and vicious pounding on my door. I dropped the radio, ran into a wall, tripped over a rug, smacked my shin on a chair - I think it was a chair - and slammed my hand against the doorknob. Seconds later I stood squinting at a massive policeman, rubbing my hand and trying to make out what he was saying over the screaming sirens and howling wind. It didn't work. He got the message I guess, because he shoved me out of the way, stomped into my house and slammed the door.

"Hunh?" I'm normally a fairly fluent speaker, except when there's a tornado headed for my house and an eight foot tall behemoth standing in my foyer.

"You gotta evac. Now. Get yer goat and yer wallet and come on!"

Goat. I stood there staring at the man and wondered why he was looking for livestock. He solved the problem for me by grabbing my arm, shining his flashlight around the room and dragging me toward the hall.

I stammered something at him that didn't make sense even to me, and ran into the wall again. He growled, dragged me down the hall, flashing that light into every room we passed. It didn't do him any good. I keep animals outside and besides, all I had was a cat. We ended up in my bedroom where he ripped my sweater off the hook on the wall, ransacked my dresser and shoved something bulky in my hands.

I knew it couldn't be a goat. It wasn't big enough and didn't feel like it had horns, but beyond that I had no idea what he'd handed me. It wasn't until he'd dragged me out the front door and propelled me down the walk that I realized I was carrying my wallet. My keys were still inside. I turned around to go get them and ran into a wall of moving muscles. That hurt. I also fell down. Goliath hauled me to my feet by one arm, shoved me toward a waiting truck and hoisted me into the back with several shivering bodies. Neighbors, I think. The truck gunned its motor and I landed in a lap.

I scrambled out of the lap, hunted down the wallet that had gone flying, and took a deep breath. Something in the back of my mind prodded me to peer out the back window of the camper shell, so I tried. The night was dark, but the thick column of pitch black that rocketed toward my house stood out like a spotlight. I shuddered, mentally thanked the mountain of flesh sitting in the driver’s seat, and hung on for the ride.

I suppose my house is gone. In fact, I expect the town is gone. I can't tell from all the way up here in the mountains, but life goes on. One day maybe I'll go back, but for now I'll sit here and fish, and watch the sun stream through the trees.

Crystalwizard is a talented author, artist, editor, and publisher who can also fill just about any other writing-related role there is. As owner of Cyberwizard Productions, Crystalwizard publishes quality fiction in various genres, including speculative, fantasy, literary, mystery, humor, and children's. Her latest project is a new print and online magazine called Abandoned Towers. Some of her stories have appeared here at ResAliens. For more information, you can read my interview with Crystalwizard from December, 2007.