From the Desk...St. Patrick's Day 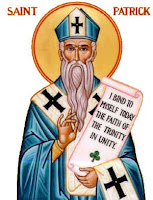 This Patron Saint of Ireland has such an interesting history, I thought I'd share a bit of it with you this month.

First, Patrick wasn't even Irish. He was a Briton, born to Roman parents. Most likely he hailed from the area of the Forest of Dean in West Gloucestershire since the big Irish raids for slaves hit the south coast of Wales during the time Patrick would have been about 16 years of age. It is now generally accepted (except in Scotland where they claim Patrick was born!) that the raid he refers to in his Confessio took place in the early summer of 401 and was led by Niall of the Nine Hostages.*

What we do know is that when Patrick was about 16 years of age, he and a large number of his father’s vassals were captured by Irish raiders and sold as slaves in Ireland. Forced to work as a shepherd, he suffered greatly from hunger and cold. Yet during his captivity, he learned to pray:

"The love of God and his fear grew in me more and more, as did the faith, and my soul was roused, so that, in a single day, I have said as many as a hundred prayers and in the night, nearly the same....I prayed in the woods and on the mountain, even before dawn. I felt no hurt from the snow or ice or rain."

After six years of captivity, Patrick escaped and was reunited with his family. But later, in a dream it seemed "all the children of Ireland from their mothers’ wombs were stretching out their hands to me." He understood this vision to be a call to return as a missionary to pagan Ireland. And he did so, despite opposition from those who thought him unqualified or the mission too dangerous. He died March 17, 460 (we believe) and so we celebrate the day as his Feast Day.

What this has to do with clovers, leprechauns, and the color green, I have no idea. But I'm celebrating St. Patrick's Day anyway by posting new stories that are totally unrelated to any of the above.

Celebrate with me, Lyn

* Thanks to Patrick Cox of The Gray Monk for his insights. This modern day Patrick (author of A Ship of Heaven?) is currently writing a historical novel about St. Patrick.