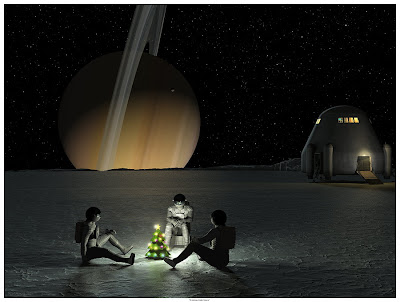 
Shinar City–City life, as we knew it, ceased at 7:48 a.m. yesterday when thousands of residents lost their ability to communicate. Health authorities believe that the victims’ central nervous systems have been attacked by a previously unknown virus. Victims appear to lose all ability to use verbal communication and wander about the city making animal-like sounds.


Ever since the beginning my art had one foot in the science fiction genre while the other foot was all over the place. As far as my style goes, I would loosely describe it as 'super-reality,' in other words, a fictitious image that looks like it could possibly be real.


3. One Million Jeboolas ~ by Michael A. Kechula
+ A Fantasy Flash Fiction (920 words): Billy’s mother told him to always help folks in need. But she also told him never to let strangers into the house.


Billy opened the door slightly and grabbed the paper. It was full of beautiful, geometric designs, with more colors than he’d ever seen. He figured Mr. Purple Paws had to be very intelligent to draw so well. Suddenly, Billy wasn’t scared anymore. Especially when he saw his name on the paper. It came right after the words, “Pay To The Order Of.”


4. I Am My Brother's Keeper ~ by Steve Doyle
+ A Short Tale of Horror (375 words): What do you do when your brother harbors an unshakable conviction that he is doomed to roam the earth for eternity?


He wanted me to see to it that upon his death he be bound hand and foot and that a stake be driven through his heart.


5. Homicidal Maniacs Running With Scissors ~ by Fraser Sherman
+ A Supernatural Irony (1040 words): Some things you just can't get away with. Like failing to clean up your room, jaywalking, and running with scissors. Until justice falls into the wrong hands...


“I always knew sin was running rampant, but I never imagined how badly until we got this job.” A proud smile formed on Parker’s lips. “If more Christians were truly willing to serve God and confront evil the way we do...”


6. The Other End of the Rainbow ~ Part 4 of 4 by M. Vance
+ A Leprechaunal Fantasy Serial (1010 words): Follow the adventures of Joel Sanders as he climbs a rainbow to another land, discovers quite a few things about himself and others (but very little gold), and then finds his way home again.