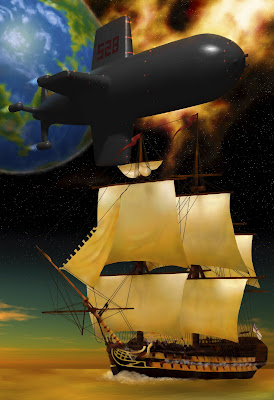 "Out of Time"
Cover Art by Chris Price
From the cover of Out of Time by Patrick G. Cox,
the author of a new Harry & Ferghal Adventure below.

1. Adam v37.2 by James K. Bowers
+ Flash Science Fiction: Does an AI have a soul?
(1010 words)
At 0.0085 seconds from start-up, after a brief and brilliant flash that my Sensory Integration Module (SIM) determined was 230-226-255 — or what might be defined as a pale violet luminescence — Visual Systems ceased functioning altogether.

2. We Few, We Happy Few by George L. Duncan
+ Science Fiction: A Spacehawk Adventure
(3740 words)
"Here they come," Bart said. About two dozen of the six-foot tall insectoids charged toward us, emitting their high-pitch battle scream. They carry small blasters that look like mini-rifles, but they prefer hand-to-claw combat.

3. In the Absence of Gravity by Patrick G. Cox
+ Science Fiction: A Harry and Ferghal Adventure.
(2910 words)
Harry listened as the Lieutenant contacted Engineering Control and gave the Compartment Address, “Control, shut down the gravity field generators on Deck Zero Four in compartment Four-Six-Seven-Bravo-Sub-Alpha. EVA Suit exercise in progress.” Too late Harry registered that the hatch...had been labeled 467BB.

4. The Evil Gene by Glenn W. Fisher
+ Biblical Fantasy: A Journalistic Journey Through the Book of Genesis.
(3500 words)
Eden—Last evening the landlord of the luxurious estate known as The Garden summarily evicted tenants, Adam and Eve. The former tenants would not comment on the reasons for their eviction, and the landlord did not return our call.

5. Even Superheroes by Lyn Perry
+ Flash Fiction: A satiric comic book fanfic.
(1000 words)
We’re not worn-out personae, not even close. Our genre is just reaching its stride. Xavier is doing an un-dang-believable job keeping all of us in the public eye, even if he is from Marvel.

6. Dusty Roads by Malin Larsson
+ Speculative Western: A genre first for ResAliens.
(3780 words)
He released a loop from the lasso and spun it above his head. It slithered through his hand as he let it fly. It hit true, snatching the side of the driver’s box. With swift fingers, he wound the rope around the horn of the saddle and grabbed the reins in one hand again.


Thank you for reading! Lyn Perry, Editor
Comment about these stories at The Alien's Pub.