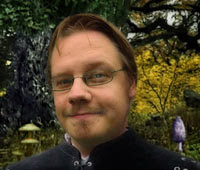 Swedish creative artist Richard Svensson saw King Kong when he was six and his life hasn't been the same since.

He states: "I've made a bunch of films with friends, self-published some books and just finished my first "pro" job as a prop-maker for a children's TV-show. I'm hoping to expand my creativity and find new friends through it. During the day I'm a newspaper image editor (where most of my loot comes from). During the rest of my life I dabble in stop-motion animation, work as a prop- and mask-maker for other filmmakers and for theatre groups."

Residential Aliens (RA) has the privilege of interviewing Richard Svensson (RS) and featuring some of his art in this month's issue.

RA: Richard, you're a film-maker, author, artist, prop- and mask-maker. Is there anything else you do for fun or profit?

RS: I also work as a fighting coach/swordplay instructor for a couple of local theatre companies. Sometimes I hold classes in mask-making. Now, all of this is just for fun and self-development. I have a day job as an image editor for a local newspaper and that’s where I have my main income.

RA: I like this piece. What's the story behind it? 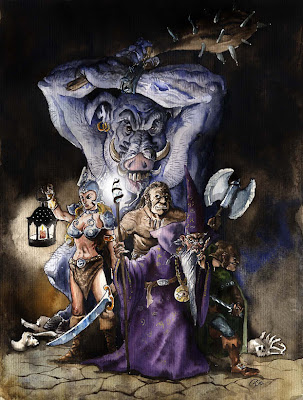 RS: This is the cover for the core rule book of a role-playing game a friend of mine made a long time ago. The painting is quite old as well. The game project never amounted to much but it was fun to work with. That's a swinotaur in the rear, sneaking up on our heroes.

RA: What creative outlet do you enjoy the most?

RS: Pen and ink drawing, single pictures. I've done some comics too, but I rather like putting my effort into one single image. But making films with my friends is probably my greatest source of joy (and sorrow).

RA: Here's an illustration for a joint project with Elfwood writer Brian Buckley, "A Field Guide to Fantasy Creatures." Tell us about your current collaboration with Brian. 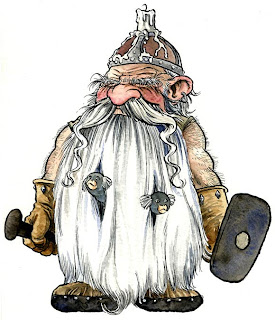 RS: I discovered Brian's "A Field Guide to Fantasy Creatures" on Elfwood, read it and loved it. I thought I could contribute with some pictures and that the project might result in some kind of book. Could be an e-book or a traditional self-published one. As of yet, we don't know what to do with it. I keep working on the pictures and when it's finished we'll see what happens.

RS: Yes, it's a familiar fairytale told from a different viewpoint. 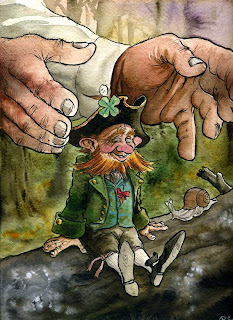 A Leprechaun's Tale
by Steve Doyle

You'll not believe with your ears what happened to me
When I walked in the forest not far from the street.
Out for a stroll I went walking one night
And I caught for myself a terrible fright.

I decided when I found a fallen tree
To sit myself down and rest me sore feet.
So down I did sit and me feet I did rest
When there came such a sound as to scare me to death.

From behind me jumped a giant of such a great size
I could nay hardly believe me eyes!
He reached and he grabbed at me very self
I screeched and I screamed and I hollered for help!

He was after me gold, sure as I stand
But I got away, so quickly I ran.
I forgot all about me feet being sore
And did nay stop running 'til I reached me own door!

So believe me young Leprechauns when I tell ye this:
Big people are real; They truly exist!

RA: And of course, your wonderful cover art, 'Cuisine d'Ogre.'

RS: Sometimes cooking is a pain in the neck for both the chef and the meal. 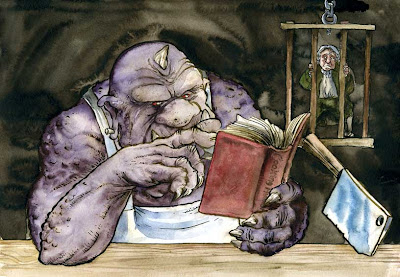 RA: How can fans find more of your work?

RS: Well, I really don't know if I have any fans yet :) But if someone would like to see what I'm up to there's my Elfwood page for drawings.

My YouTube page with examples of my films and animations.

And my own web site, the Lone Animator, with images of puppets, masks and props.

Also, if someone doesn't mind that it's all in Swedish there's this children's site that I've written and illustrated. I've been working on it for seven years so there's over 1000 pages of my work (for those who can't get enough) at Unga Fackta.

RA: Well, Richard, it has been a pleasure interviewing you and showcasing your art. We wish you all the best in your future endeavors.

All artwork on this page © Richard Svensson