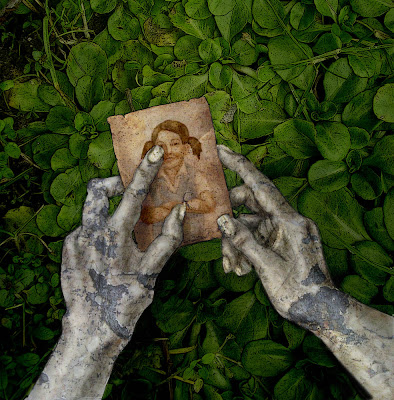 1. Misunderstood by Rick McQuiston
+ A genre first for ResAliens! A sad and evocative horror story.
(1040 words, PG-13)
"Are you going to eat that?" he asked Calvin who sat opposite him with a half eaten rat splayed on his lap.

2. Featured Artist: Frida M. Bergholtz
+ An interview with our cover artist and RPG fanatic from Sweden.
(585 words and 5 art pieces)
"I play role playing games whenever I get the opportunity and enjoy all kinds of nerdy hobbies."

3. Natural Balance by Gerry Sonnenschein
+ A speculative thriller filled with suspense...and revenge.
(2405 words)
I pulled the canister vacuum cleaner out of the closet...and went from room to room, searching for ladybugs. One after another, they popped into the wand as I exposed them to the unrelenting suction.... I hoped their experience was excruciating.

4. In the Shadow of the Sphinx by Stoney M. Setzer
+ A supernatural mystery from the Golden Age of cinema.
(5970 words)
"Plague and woe, Mr. Rusch. Abandon this project. If you persist, then the curse of the Pharaoh shall be upon you and your crew."

5. The Pride of the Tribe by Dan Devine
+ The conclusion to this Native American spiritual fantasy.
(3535 words)
The Soulsword sliced through the blade of iron as if it were passing though parchment and cleanly severed the neck that lay within its path. The only sound that escaped the man was a soft gasp, which not even the Wir within the cage detected.

6. Up or Down by Alex Moisi
+ A spiritual flash fiction about eternal consequences.
(940 words)
Daniel Mosch first thought about his death on the morning he died.

7. A Prayer for Salvation by Thomas Blakemore
+ An emotive and sorrowful flash fiction that cries out for...
(720 words)
Watch as I reach out my shaking hand to brush her cheek. She stirs, smiles, her mouth opens as she starts to speak... I can’t remember her voice.

Thank you for reading! Lyn Perry, Editor
Comment about these stories at The Alien's Pub.